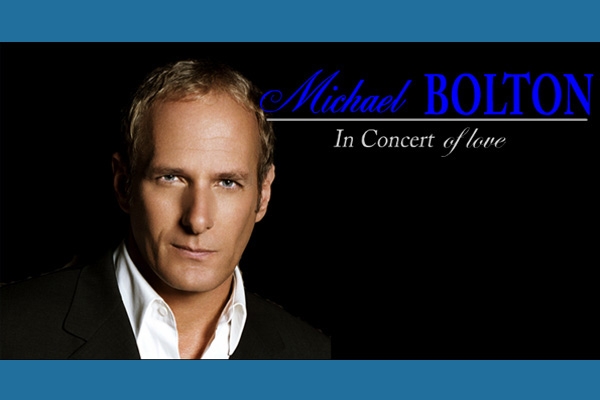 Ι am very happy I had the chance to work with Michael Bolton, organise and promote his concerts in Greece!

Michael Bolton, the multiple Grammy Award-winning singer, songwriter and social activist, has sold more than 65 million albums and singles worldwide. He continues to tour the world every year, all while writing, recording and taping for a wide array of projects spanning music, film, television and branded entertainment. Known for his soulful voice and poignant lyrics, his timeless charm and good looks have also earned him a spot in several "People Magazine's Sexiest Man" issues, including slots in the "Sexiest Man Alive" issue. Bolton remains committed to humanitarian causes, especially through the Michael Bolton Charities as well as other philanthropic organizations. 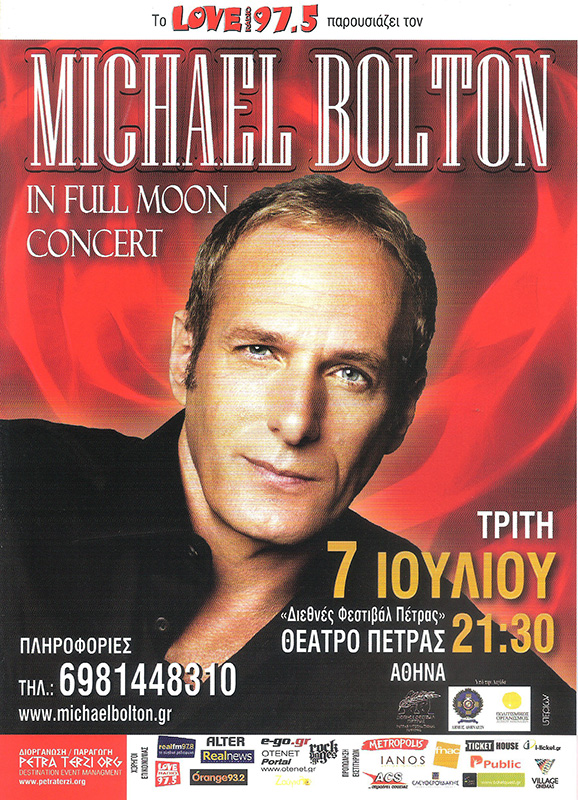 In recognition of his artistic achievements, Michael won 2 Grammys for Best Pop Male Vocal Performance (nominated four times), 6 American Music Awards, and a Star on the Hollywood Walk of Fame. As a songwriter, he has earned over 24 BMI & ASCAP Awards, including Songwriter of the Year, 9 Million-Air awards, and the Hitmakers Award from the Songwriters Hall of Fame.

Internationally renowned, Michael has recorded and performed with musical icons that have inspired and influenced his own career. He joined Luciano Pavarotti on stage in a highly praised rendition of "Vesti La Giubba," and pays homage to the Italian tenor when performing the aria "Nessun Dorma" at each of his concerts while on tour. He has sung with Placido Domingo, Jose Carreras and Renee Fleming and played guitar with BB King. Bolton earned a Grammy-nomination for "Georgia on my Mind," and was invited to sing the classic song to Ray Charles when Ray was honored at the International Jazz Hall of Fame Awards in 1997.

A diverse and prolific songwriter, Bolton has worked with some of the greatest songwriters and producers of our time, including Lady Gaga, Diane Warren, Desmond Child, David Foster, Walter Afanasieff, Kenneth "Babyface" Edmonds, John "Mutt" Lange, Dann Huff, A.R. Rahman, Phil Ramone, and Ne Yo, among others. He is one of the very few artists to have co-written with the legendary Bob Dylan, resulting in the mega hit, "Steel Bars." Michael has penned songs that have been recorded and performed by a diverse list of over 100 artists, ranging from country western legend Conway Twitty to hip hop superstar Kanye West featuring Jay Z and John Legend. Other greats who have performed Bolton's songs include Mark Anthony, Wynonna Judd, Joe Cocker, Peabo Bryson, Kenny Rogers, and Patti LaBelle. Michael has written #1 hit singles impacting the careers of artists such as Laura Branigan ("How Am I Supposed to Live Without You"), KISS ("Forever"), Barbra Streisand ("We're Not Making Love Anymore"), Cher ("I Found Someone"), and Kenny G ("By the Time this Night is Over")..

Michael has always balanced a love for writing new songs with a passion for covering the classics. On his breakthrough album The Hunger, Bolton authored the #1 single "That's What Love is All About" and sang his chart topping version of Otis Redding's "(Sittin' On) the Dock of the Bay," which was a hit on four radio formats. That album was certified double Platinum and shipped 4 million copies worldwide.

More in this category: « Kevin Costner National Andalusian Ballet »
back to top